A Brief Anthropology of Fashion

What if I told you that the feet below belong to a guy you will one day marry: 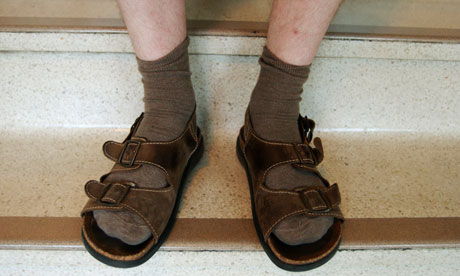 Yeah, that's right: Perhaps the father of your children.

What are you thinking now?[1]

The connections we make with other people often don’t start with words, but with visual first impressions, which generally get a head start on words by seconds, minutes, or much longer. Then, words and gestures may have to struggle with that impression to counteract any negative feelings. Or, maybe they aren’t called to that struggle because everything has gone along swimmingly. (Phew!) Most often it takes a very long time for a person’s words and actions to overturn a first impression, but when it finally happens, it might be too late.

Is this guy for real?

Well, that’s the power of a first impression! You’ve been wired to take in the world through your senses, make some general assumptions, and then take action from there.

If we break down this particular first impression above, we can see that it’s not so much the person, but the person’s choice for footwear – and hosiery. We instinctively assume that the choice for what one wears is a sort of value judgment on his or her part. That’s certainly true, but to go deeper, we have to investigate what clothing really is.

Fashion historians (and other experts concerned with the human condition) agree that there are two purposes to clothing: 1. Protection from the environment, and 2. Privacy. No one I know operates on just these levels anymore. (I know a few people who try, but they’re pretty frustrated because it’s actually rather impossible.)

Consider this: If we once wore woolly mammoth hair to protect us from the cold winds and to establish a boundary between ourselves and the eyes of our fellow man, how in the world did we arrive at:

Okay, no one I know wears that either, but I’ll return to modern fashion in a moment. For now just think about what happened between fur and crazy queen bling.

Well, what did happen?

Fashion happened! The difference between clothing and fashion is that fashion communicates something about the wearer as a person.[2] My guess is that the moment people realized they had a little control over which way a fur hung or what to do with some amazing animal teeth, they reconstituted fit and shape (and accessory) according to their personal wishes. This is what I picture:

Cave Man: “Here is your ration of fur until the next hunting season.”

Cave Teen Girl: “May I have a little tendon and some front teeth to accessorize? Molars are so last year”

And I also guess that it happened almost immediately, although I have no scientific data to back me up. Now fast forward a little bit and think of uniforms or religious costumes or what fashion historians call “ethnic costume.”

“Ha!” You say. “There’s your example of clothing that’s not fashion!”

Well, it sort of is fashion if we use the communication definition (It's actually called "traditional costume."). A uniform denotes a certain job, membership of an organization, or status as a student. Religious garments tell of a Faith, and can even signal your marital status. Finally, ethnic costume, like a Sari or veil communicates a whole range of variables such as geography, age, marital status, or class.

Of course, when most of us use the word fashion, we are referring to the Western notion of personal fashion which began in Europe in the 1200s[3] and has spread over time (the notion not the fashion) to just about everywhere around the planet with a few pockets of exceptions. No, Europe didn’t invent the concept of the individual-attempting-control-of-what-she-wore, but Western’s particular brand of it went global after a while, and well, the rest is history.

Fashion is choice, and behind the word “choice” is the idea that in going for one thing, we didn’t go for another. It’s a judgment call of sorts and reflects many things about the person making it: Sense of self, level of confidence, aspirations, experiences, and especially attitude.

No wonder first impressions are so powerful. We aren’t just reading the cover of a book, but also a table of contents and a few choice passages!

Next installment: How to make a good first impression

[2] If you really want to see a detailed breakdown of the purposes of clothing, check out Fashion Design by Sue Jenkyn Jones (Laurence King, 2005). She elaborates on the ideas of “utility, modesty, immodesty, adornment, symbolic differentiation, social affiliation, psychological self-enhancement, and modernism.” Yes, she’s thought very deeply on this matter.