To Hose or Not to Hose?

In Style Magazine (On-Line) beat me to this topic. For that matter, many others have as well: 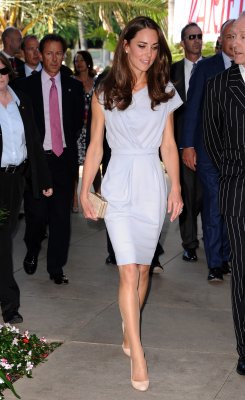 Catherine, Duchess of Cambridge and Pippa Middleton are fans of the nude pantyhose! Thanks to the sisters, sales of the hosiery have spiked nearly 85 percent in England, The Telegraph reports. Buckingham Palace enforces a strict dress code for women—they must wear stockings and closed-toed shoes, and royals like Queen Elizabeth, Camilla, Duchess of Cornwall and Princesses Beatrice and Eugenie all slip them on when they’re out. The look is also practical, as pantyhose provide extra warmth on chilly nights and a layer of protection against the sun. See http://news.instyle.com/2011/07/13/kate-middleton-pippa-middleton-nude-pantyhose/

Well, I've been meaning to tackle this topic, but my previous plans revolved around simply longing for the good old days when a girl could keep her legs warm and her spider veins private. (Now how is leg makeup easier than hosiery?) My beginning sentence began something like, "What dastardly dark force lay behind the revolt against panty hose..." or something like that.

Anyway, it seems that Anne Hollendar is right. The only way to influence a woman's choice for tasteful fashion is to provide inspiration and an appeal to the imagination rather than rational arguments. (Never fear, I make the same claim for men's fashion!) In her book, Sex and Suits: The Evolution of Modern Dress she cites the Rational Dress Movement of the middle of the 19th century as lacking that kind of inspiration. Truth is, women just found the look of a ridiculously pinched bodice as pretty.

So, Go Kate Go! You look great and I'm going out to stock up on my own nude hosiery.